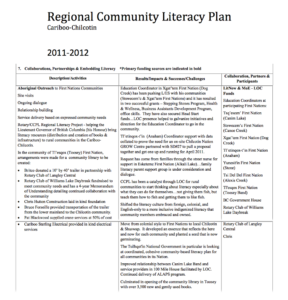 The Toosey First Nation (or Tl’esqox First Nation) is a Tsilhqot’in First Nations government located in the Fraser Canyon region of the Canadian province of British Columbia. It is a member of the Carrier-Chilcotin Tribal Council, which includes both Tsilhqot’in and Carrier (Dakelh) communities.

Indian Reserves under the administration of the Toosey First Nation are:[2]

On June 26, 2014 at 6:45 am the Tsilhqot’in Chiefs, legal counsel and invited dignitaries from Union of BC Indian Chiefs and First Nations Summit were given the news that the Supreme Court of Canada granted full Aboriginal title to the Tsilhqot’in Nation Title Claim Area. While the media coverage of this decision has been far-reaching, the Chiefs thoughts were with the Tsilhqot’in peoples. The success of this case was based on the courage of our Elders and the strength of the culture and stories. In this time of celebration, we are also reflecting on the past 25 years of struggle and perseverance. The Tsilhqot’in National Government takes this time to thank all organizations and people that have shown their support through this process.

TNG is interviewing Tŝilhqot’in Knowledge Keepers as part of an ongoing Traditional Use Study (TUS). Inter- viewing our knowledge keepers allows us to gather and protect important information about Tŝilhqot’in land- use, language, history, traditions & laws. The information collected during the 1999-2001 Elder interviews played an important role in last year’s Title decision for Xeni and the Tŝilhqot’in Nation, and it continues to play an im- portant role in helping to protect important sites from logging and mining operations. As we continue to gather more information from our Elders, we will have a better chance of proving Rights and Title in other parts of the Nation’s Territory. With permission from the Elder, we plan to use some information from the interviews for educational purposes as well — notably in culture, history, laws, and especially language. For example, we can extract short audio clips from the interview sessions to use in Language and other educational programs. With the Title decision last June, the Tŝilhqot’in people will be able to exercise more control over a portion of the tra- ditional territory. By interviewing our Elders, we are also able to learn how our people governed themselves be- fore contact with Europeans, which will help us to decide how we want to structure out governance models in the future. For all of these reasons, this TUS project is very important for the future direction of the Nation as a whole. Give us a call today – we would love to hear any comments, concerns or feedback. And if you or some- one you know would like to share your knowledge with the Nation, we would be honoured to hear from you. Sechanalyagh!