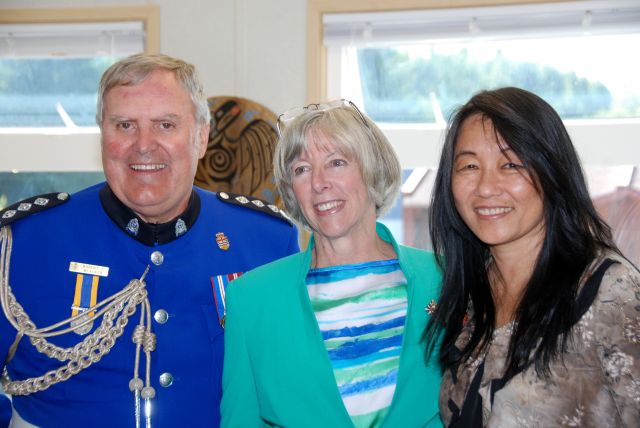 No, it’s not Prince Rupert, it’s Fort Rupert. Prince Rupert is located well to the north, while Fort Rupert is a First Nations community located next to Port Hardy. That’s where you will find the 8th Write to Read library, officially opened on August 20th by her Honour, Lt. Governor of BC Judith Guichon.

As always, this library was a collaborative effort between participating partners, which in this case include Government House Foundation, members of the Burnaby Metrotown Rotary Club, the Port Mcneill and Port Hardy Rotary Clubs, and the Kwakiutl band of Port Rupert. Britco Structures, as always, donated the modular building and thanks to BC ferries for assisting with the delivery.TLD Computers(LOndon Drugs and Hewlitt Packard) donated the computers

Also in attendance at the opening were Rotary District Governor Ken Wilson (D5040) and Peggy, along with Gloria Wing Stadt, Bala Naidoo, Elizabeth Cheung, and Darlene Broadhead of the Burnaby Metrotown Club.

The actual library (books, cataloguing, computer systems, etc) was put together by our Library Response Team of Carol, Barbara and this time joined by Bonnie Sutherland (North Delta Rotary Club and Afroteck) plus Marion Hunt, Carole Ford and many Fort Rupert community volunteers. It truly was a cooperative effort, as always.