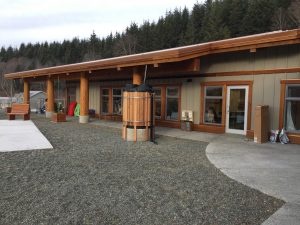 Where the heck is Quatsino, you ask? According to Wikipedia, it’s “a small hamlet of 91 people located on Quatsino Sound in Northern Vancouver Island, only accessible by boat or float plane.” Well, that’s not entirely correct. It’s a village, not a hamlet, about 15 kilometres south of Port Hardy, there are more than 91 people living there these days, & you can actually get there by road because the Write to Read team managed to do so by truck on February 7th, 2017, to deliver yet another library to another First Nations community in BC. Her Honour Judith Guichon, Lt. Governor of BC, was on hand as usual to celebrate the opening.

These days residents of Quatsino are employed in the forest, fishing, and eco-tourism industries. Some professionals also live there and practice their professions via the internet but Quatsino has an interesting history. The BC government at the 1893 Chicago Exposition offered free land to prospective colonists through Crown grants. A group of Norwegian farmers from Fargo, North Dakota jumped at the opportunity and in 1894 a steamboat arrived. The pioneers scouted out the area with help of the local First Nations. Thirty 80 acre lots were surveyed, a Post Office opened, a government wharf built, a saw-mill in operation, a general store opened and a monthly freight service from Victoria was established. Then a one-room school was built and a teacher hired to mentor 17 school aged children. 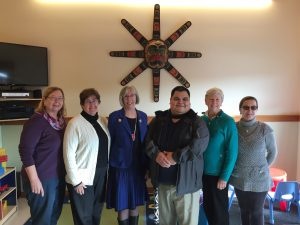 The community thrived over the years as mines were developed, the Port Alice pulp mill was built, forestry and mineral claims offices opened, fish canneries and processing plants constructed. The five room Quatsino Hotel plus several rental cabins were built for workers and visitors to the area. Mining and fishing declined and it wasn’t until the early 1970’s that telephone poles were installed and electricity arrived. Private phone lines became available in 1995 and opened up the community to internet service.

Today the first school is now St. Olaf’s Anglican Church. The “new” Quatsino School celebrated its 70th anniversary in 2004. The Quatsino Hotel has been renamed Eagle Manor Resort and attracts visitors from around the world. Changes to fishing regulations have resulted in the commercial fisheries largely being replaced by sport fishing. Currently several lodging and sports fishing charter facilities are operated with beautiful views of Drake Island and Quatsino Sound.